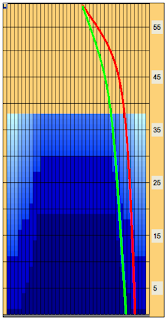 Coming into this week, I decided to move my mark right to about the 5 board and then adjust my body right until I found the pocket. My hope was that I could avoid most of the heavy oil and get the ball to hook earlier in the backend. This worked wonderfully and I started the first game by throwing at the 5 board and beginning my approach with my left foot on the 20 board (red line in diagram).

I started with three spares in the first game and then hit light to leave the 1-2-10, which I opened. I moved back a few inches as it seemed like the oil I was running through in the front end was beginning to carry further down the lane.  I started striking, including a turkey late in the game. In the tenth frame I left the 6-pin and missed about a finger's width to the right, blowing a 200 game. I finished the game with a 199 and took my first point on the night.

Early in the second game I missed the 10-pin just barely to the left. The rest of the game was spent picking up spares, mainly corner pins, until the tenth frame.  I hit a bit high and left the 5-10 split and could only pick off the 5-pin.  I finished the game with a 169 and gave up a point to my opponent.

The third game started with the ball continuing to run a bit high. I tried moving up on the approach, and then left a board, but to no avail. Luckily I kept picking up my spares, so I wasn't punished too much. In the fifth frame I decided to abandon the outside line and moved left to the 21 1/2 board and threw at the 9 board (green line in diagram). This new line worked great and I was getting good carry. In the tenth frame I missed my mark and hit Brooklyn and then missed the spare, opening in my third straight tenth frame and blowing my second 200 of the night.  I finished with a 193, tying my opponent for a half point.

For the first half of the fourth game I kept missing my mark, mostly to the left. I got lucky once when I completely missed the headpin, but the pin action was enough to take out the 1-2-4 from behind for a strike.  I remembered reading recently Susie Minshew's blog post on the International Art of Bowling that missing your mark is a symptom, not a problem, so I needed to find what problem was causing me to miss my mark. I noticed that I was not following through on my release earlier in the evening, and so I decided to really concentrate on following through and posting my shots.  Immediately the problem disappeared and I began to hit my mark and strike. I finished with a clean 210 game and another point for defeating my opponent. Matt also beat his opponent and we took the team game for another two.

This week I was eventually able to play further inside after the lanes began to change. By the time I wore through the light oil on my initial outside line, both bowlers on the other team had begun to play around the second arrow. They did all the work of moving the oil out of the way so that I was able to play just right of the second arrow and still get the ball to hook into the pocket.

In the end, I didn't feel that this pattern was overly challenging. While it did force me to play closer to the gutter, which is outside of my usual comfort zone, many of the problems I faced were of my own doing. Next week we begin on the PBA Cheetah pattern and I hope I don't add to the challenge by goofing up.
Posted by Zach at 10:48 AM