I'm going to forego my usual in depth recap because I have a bone to pick with the bowling center that hosts my league. I had another decent night with no glaring problems. I struck the first five in a row the last game, but then started coming in high and lost the ability to strike. Over the last four weeks I've averaged 207 in league play, so I'm pretty happy with my performance. 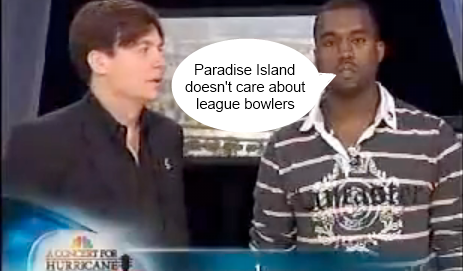 I have previously discussed some issues I had with our bowling center, Paradise Island Bowl. During week 6 they placed a group with three small children on the lane right next to our's. On previous occasions they have turned away league bowlers from pre-bowling, even though the entire 32 lane center was empty, because they were expecting birthday parties and open bowling an hour later.

This week we were bowling on lanes 1 and 2, which are the closest to the doors, bar, and the first to be oiled. Lane 1 is also right against the wall, making it difficult for left handed bowlers and righties shooting at the 10-pin. This pair of lanes is notorious for having a sticky approach and every week during practice someone has to get an employee to come down and clean it.

Monday night was no exception. My first practice ball is always off-speed, basically just one big stretching exercise, but I was even more cautious being the first person to throw on lane 2. On my fourth step I expected to slide at least a little bit, but my left foot stuck fast to the approach and I went down hard on my right knee. It was pretty similar to the fall I had three years ago, which resulted in a bruised knee and a bulging disc in my back that took 6 months and physical therapy to heal.

Well by the end of the night I had a lump on my knee the diameter of the thumb hole on my bowling ball and it has since bruised up quite nicely. Since Thursday I started having sciatic nerve pain in my right leg and some stiffness in my lower back. I've started doing my physical therapy stretches and hopefully the pain will subside quickly. I can live with the knee bruise.

So why is my fall the center's problem? Firstly, they have failed to address a chronic problem that affects league bowlers on a certain pair of lanes. If you have to clean the approach every week, interrupting practice to do so (and not providing additional practice time to make up for it, might I add), then a light bulb should go off that says "Hey, maybe we are doing something wrong here!" I don't whether they are making a mess when preparing the oil machine or what, but they need to reevaluate their procedures.

I understand that everyone in the league has to bowl on this pair at some point so it evens out in the end, but the point is we shouldn't have to deal with it. I am probably the youngest person in the league at 27, so imagine what could happen if one of the older bowlers, some of which are in their 70s, fell down instead of me.

Also, since the center clearly has no problem with putting open bowling directly next to league bowlers, why not bump our league down one pair to the right so that A) we don't have to deal with a wall right next to one of the lanes and B) we don't have to deal with the sticky approach. Let the open bowlers, many of whom probably don't slide when bowling anyway, cope with the glue trap they call an approach.

Their lack of response is just further proof that leagues do not matter to many bowling centers. Leagues are just a way for centers to make money during their slow time during the week, i.e. weekdays and weeknights.  Once the weekend rolls around its all about parties and groups open bowling. Even during league play they shoehorn open bowling onto every last lane in the center. Bowling centers have embraced their roll as a place where people go to enjoy an activity and shunned their intended use as a place where people who are serious about their sport come together to improve their skills.  I guess I can't blame them, they have a business to run, but they aren't doing the sport of bowling any favors.

Maybe its just where I bowl. I go to this center out of convenience, not because I particularly enjoy it there. All of the best bowlers in the area throw at two other centers, which are twice as far from my house, so this is the best option for me, particularly in the winter.

Does anybody else have this problem? Am I too pessimistic?