I came into the night a little worried about how I was going to perform. I had developed a head cold the night before and was feeling a bit groggy heading into the evening. The lanes have been consistent the last few weeks so I knew where I needed to throw.  Getting the ball there was going to be the real challenge.

I struggled on the left lane most of the night and threw two strikes in the entire first game. I picked up all but one of my spares, a missed 10-pin.  The lack of strikes shot down my chance at a 200 game, but the spares kept me afloat with a 182.

The second game started a bit better with alternating strikes and spares in the first five frames. In the sixth frame I missed my second 10-pin of the night. I stayed clean the rest of the way, but couldn't string anything together. I finished the game with a 186 and won the game for our team by 6 pins.

The last game was a struggle. I started coming high on the right lane so I upped my approach back to my preferred speed. The left lane became a struggle once again and I just couldn't throw a consistent shot. I opened twice early on in the game. I can't recall the leaves, but they were the result of light hits. Going into the tenth frame I knew I had to mark to keep my team in it. A good pocket hit left the 9-pin, which I converted. I needed six pins to win the game and hit high on my last ball. I left the 3-6-9-10, but it was just enough to squeak out a one pin victory. I finished with a 177 game and another 545 series.

Well I battled the same problems as last week and earned the exact same result: a 545 series. My delivery was erratic and I missed my mark left more often than I actually hit it. I struck less than ten times, but fortunately picked up most of my spares. I can attribute a few of the misses to sticking at the foul line and pulling my shot. The others seem to be an issue with my release. I broke out my usual trick of holding the ball further right on my approach, but it didn't help. I had a difficult time concentrating and fatigue hit me worse that it has in a long time. I don't want to use my cold as an excuse, but I think it did play a factor, albeit a small one. This issue is something that I would usually work on in a weekend practice session; however, my life outside of bowling interfered with those plans and I wasn't able to get in any games. I guess I will just need to focus on my release that much more this coming week. 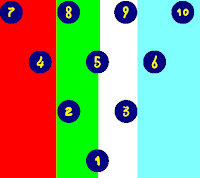 One idea or philosophy I did implement into my game Thursday night was a new approach to spare shooting. That afternoon I had read an International Art of Bowling blog post on spare adjustment systems. In the post, the author suggests breaking down spares into four zones: 7/4-pin zone, 2-pin zone, 3-pin zone, and 6/10-pin zone (see a crude representation in my handy colorful graphic on the left). So instead of trying to line up each shot specific to the leave, a whopping 1,023 possible combinations, you have one shot for picking up spares in each zone. This oversimplifies things a bit, but by utilizing the basic concepts of this approach, and fine tuning it to multi-pin leaves and my own style, I was able to pick up the majority of my leaves. Of my four misses on the night, two were missed 10-pins thanks to a lapse in concentration, and the others were washout near-splits with the headpin and a corner pin standing. I liked this simple approach and think that mastering this method will go a long way in improving my overall game.