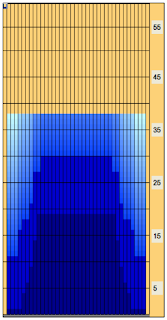 There is little information regarding the NCAA #3 oil pattern that I could find on the internet.  Really all that I could find was the lane conditioning PDF that bowling centers use to lay the pattern, so my observations will be based off of my week 1 experience.

NCAA #3 is a short pattern, 38' in length, but the oil that is there is extremely heavy in the front end. While you would expect the ball to move early once clearing the pattern, the oil actually lays on the ball and prevents hook until much further down the lane.

The goal here is to avoid as much of that early heavy oil as possible and getting your ball into the hook and roll at a reasonable area of the lane. Strokers and tweeners throw pretty close to the gutter on this pattern, but crankers can get away with playing further inside. As play goes on, the oil is carried further down the lane and the ball mimics the late breaking reaction caused by the heavy front end oil early on.

As I said, this description is based on my observations during one outing so if any readers have corrections or additions regarding this pattern please let me know in the comments.
Posted by Zach at 11:31 AM