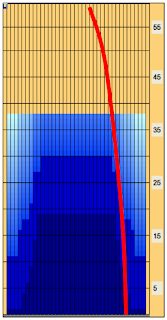 We get 15 minutes of practice in this league and I spent every bit of it trying to get my ball into the pocket. By the start of the first game I was standing with my left foot on the 22nd board and throwing over the 8 board at the arrows (see diagram). Even though this is a short pattern, the ball really didn't hook much until the last second.

I finally did find the pocket during the first game and was then able to adjust back a few inches on the approach to get the right pocket hit.  Unfortunately my spare shooting was not very good to start the evening and I had a few opens. I finished the game with a 155 and no points, but gained some good knowledge for the rest of the evening.

I was more consistent during the second game, but missing your mark by as much as a board meant either missing the headpin to the right or hitting the 1-2 pocket light on the left. I started to become more comfortable in shooting my spares and I realized that I could use my strike ball for corner pin pick ups. I finished the second game with a better 170. In addition, Matt and I each beat our opponents and we took points for winning the team game to even things out on the night so far.

Early in the third game I decided to lay the ball a little flatter in my hand at the beginning of my approach to get some more revs through the oil. The result was more strikes and single pin leaves. I was able to keep the third game clean and shot my first 200 in the league. I beat my opponent to pick up another point and we took the team game for an additional two, putting us in the lead going into the final game.

The fourth game was uncharted territory for me as I typically only bowl three. Factor in the extra practice time and the quick pace and I was exhausted. I started to miss my mark a bit more often and missed a few spares during the last game. I finished the game with a 157. Our opponents took advantage of their turn to change bowling order, and thus opponents, and defeated us this game and by total pinfall, leaving the final points on the night 10-7 them.  By the way, our opponents were a couple of 17 year olds.

The ball didn't react quite like I was expecting, but I adjusted to the conditions. The heavy front end oil displaced further down the lane, so the ball never broke early even on such a short pattern. Also, the pattern never really broke down, but each bowler was playing a different part of the lane so we were really only playing against ourselves in that aspect and little adjustment was needed once I found a line that worked.

One good thing is that I was immediately taken out of my comfort zone, playing further right than usual. Next week I want to try to move my mark out closer to the 5 board to see if I can get a little more movement from the ball in the back end.
Posted by Zach at 12:08 PM